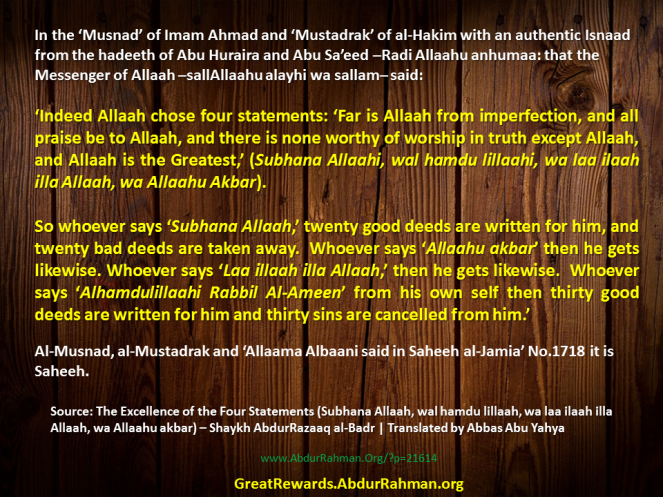 7- From their excellence is that Allaah chose these statements and chose them for His slave, and Allaah has set aside for the one who remembers Allaah saying them, with great and abundant reward.

In the ‘Musnad’ of Imam Ahmad and ‘Mustadrak’ of al-Hakim with an authentic Isnaad from the hadeeth of Abu Huraira and Abu Sa’eed –Radi Allaahu anhumma: that the Messenger of Allaah –sallAllaahu alayhi wa sallam– said:

‘Indeed Allaah chose four statements: ‘Far is Allaah from imperfection, and all praise be to Allaah, and there is none worthy of worship in truth except Allaah, and Allaah is the Greatest,’ (Subhana Allaahi, wal hamdu lillaahi, wa la illaah ila Allaah, wa Allaahu Akbar). So whoever says ‘Subhana Allaah,’ twenty good deeds are written for him, and twenty bad deeds are taken away.  Whoever says ‘Allaahu akbar’ then he gets likewise. Whoever says ‘La illaah ila Allaah,’ then he gets likewise.  Whoever says ‘Alhamdulillaahi Rabbil Al-Ameen’ from his own self then thirty good deeds are written for him and thirty sins are cancelled from him.’ [1]

The reward for the slave of Allaah saying al-Hamd (Praise) is increased more than the other four, when he says it from his own self; this is because al-Hamd does not generally occur except after a reason for saying it, like eating or drinking, or the occurrence of a blessing, so it is as if the al-Hamd occurs due to something in return, for that which has been rendered to the slave of Allaah at the time of saying al-Hamd, so if the slave of Allaah mentions al-Hamd from his own self without any pushing factor to do so, nor for a new blessing (which Allaah has given him) then his reward is increased.