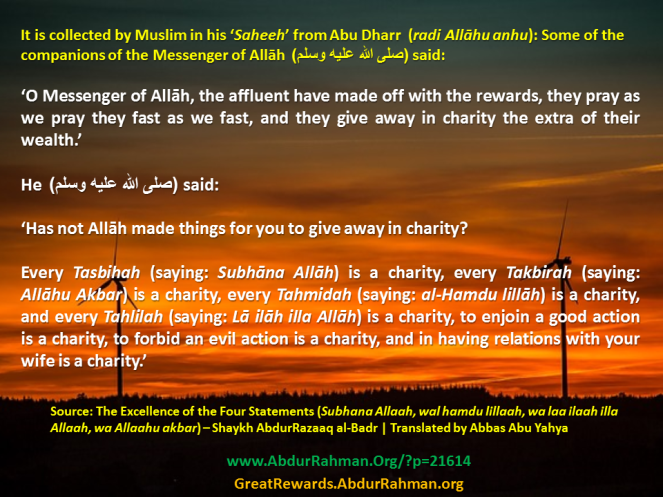 11- From the excellence of these words is that for the slave of Allaah they are Sadaqah (giving charity) when he says each one of them.

It is collected by Muslim in his ‘Saheeh’ from Abu Dharr –Radi Allaahu anhu: Some of the companions of the Messenger of Allaah –sallAllaahu alayhi wa sallam– said:

‘O Messenger of Allaah, the affluent have made off with the rewards, they pray as we pray they fast as we fast, and they give away in charity the extra of their wealth.’

‘Has not Allah made things for you to give away in charity?

They said: ‘O Messenger of Allah, when one of us fulfils his desire (with his wife) will he have some reward for that?’

‘Do you not think that if he were to act upon it unlawfully he would be sinning? Likewise, if he has acted upon it lawfully he will have a reward.’ [Saheeh Muslim]

The poor people thought that there was no Sadaqah except by giving money, and they were incapable of doing that, so the Prophet –sallAllaahu alayhi wa sallam–informed them that all types of good actions and being good is Sadaqah, and the Prophet –sallAllaahu alayhi wa sallam– mentioned that at the head of good actions are these four statements ‘Far is Allaah from imperfection, and all praise be to Allaah, and there is none worthy of worship in truth except Allaah, and Allaah is the Greatest,’ (Subhana Allaahi, wal hamdu lillaahi, wa la illaah ila Allaah, wa Allaahu Akbar).