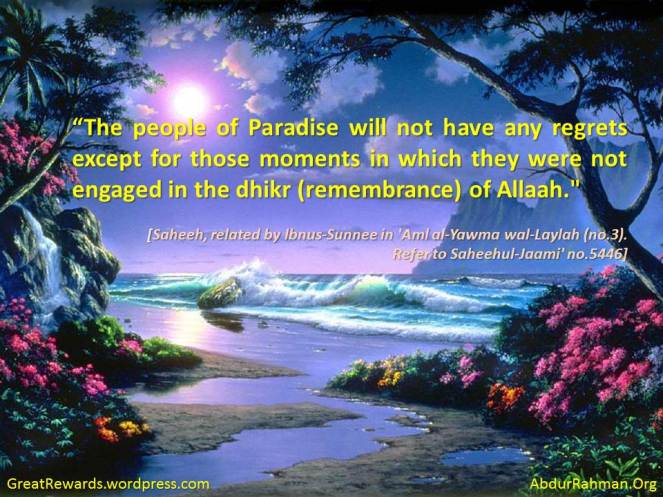 The Prophet sallallaahu ‘alayhi wa sallam said:
“The people of Paradise will not have any regrets except for those moments in which they were not engaged in the dhikr (remembrance) of Allaah.”
[Saheeh, related by lbnus-Sunnee in ‘Aml al-Yawma wal-Laylah (no.3). Refer to Saheehul-Jaami’ no.5446]

the Prophet sallallaahu ‘alayhi wa sallam said:
“There is no time in which the son of Aadam does not remember Allaah in it, except that it will be a source of regret for him on the Day of Judgement”
[Hasan, related by Abu Nu’aym in al-Hiliyatul-Awliyaa (51361-362). Refer to Saheehul-Jaami’ no.5720] 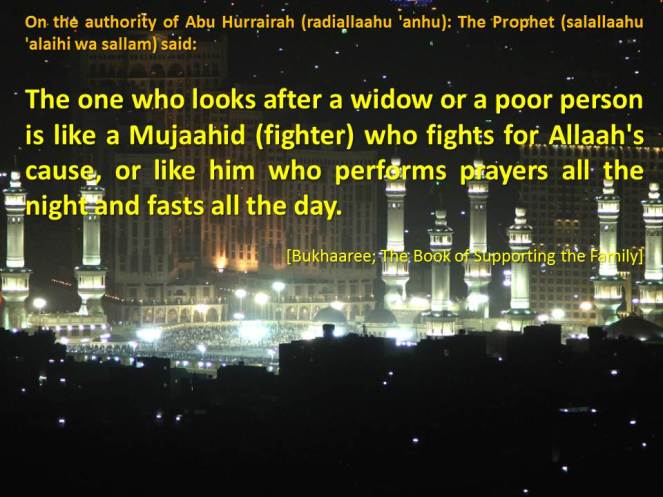 The one who looks after a widow or a poor person is like a Mujaahid (fighter) who fights for Allaah’s cause, or like him who performs prayers all the night and fasts all the day. 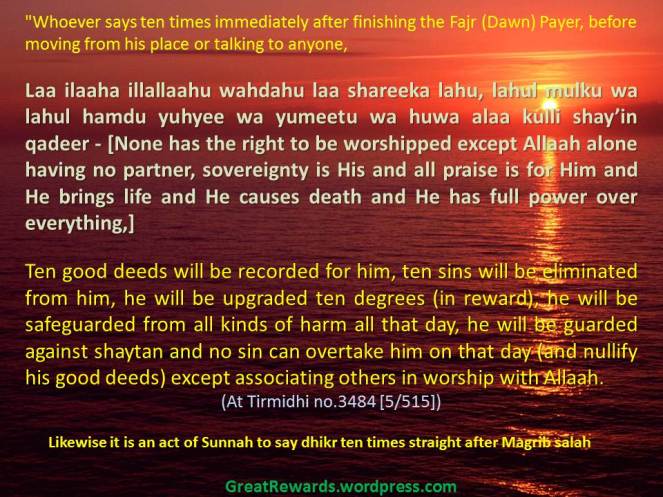 On the authority of Abu Dharr (radiAllahu anhu), that the Prophet (sallAllahu alayhi wasallam) said –

“Whoever says ten times immediately after finishing the Fajr (Dawn) Payer, before moving from his place or talking to anyone,

“laa ilaaha illallaahu wahdahu laa shareeka lahu, lahul mulku wa lahul hamdu yuhyee wa yumeetu wa huwa alaa kulli shay’in qadeer – [ none has the right to be worshipped except Allaah alone having no partner, sovereignty is His and all praise is for Him and He brings life and He causes death and He has full power over everything,]”

ten good deeds will be recorded for him, ten sins will be eliminated from him, he will be upgraded ten degrees (in reward), he will be safeguarded from all kinds of harm all that day, he will be guarded against shaytan and no sin can overtake him on that day (and nullify his good deeds) except associating others in worship with Allaah. (At Tirmidhi no.3484 [5/515])

At-Tirmidhi commented on this hadeeth saying, “This is a hasan, saheeh hadeeth (i.e a good and authentic hadeeth)”.

Likewise it is an act of Sunnah to say dhikr ten times straight after Magrib salah too, according to a hadith related by Imaam Ahmad Hanbal (rahimahullah) on the authority of Umm Salamah (radiAllahu anha), hadith number 26430. Also stated in Sahih Ibn Hibban no. 2023.